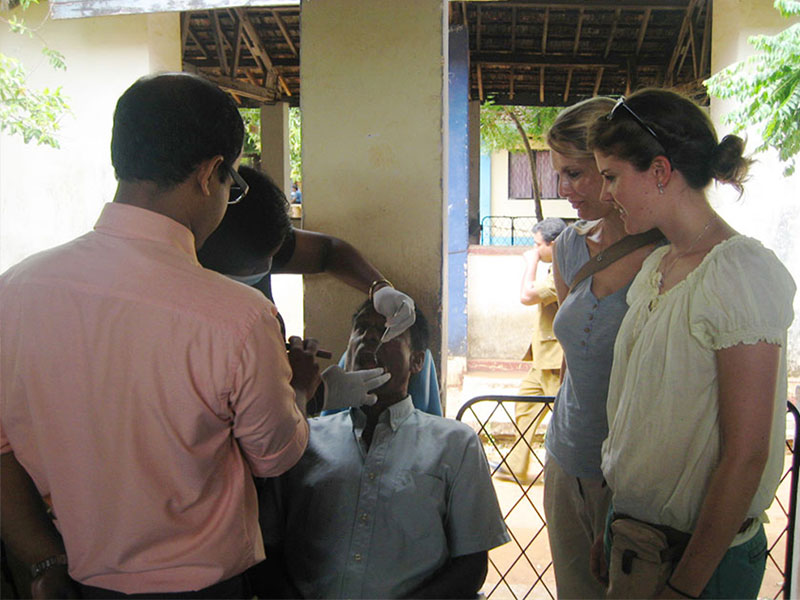 It had been clear to us for a long time that we wanted to do a clinical traineeship abroad together. Since neither of us had ever been to Asia, we wrote to various clinics in the Asian region. We received our first offer from the Sakuki Dental Hospital in Kurunegala, Sri Lanka. Dr. Samantha, who owns the practice, was very helpful right from the start and we were able to clarify all our questions with him easily by email. From the acceptance to the start of our clinical traineeship, we still had 9 months left in which we had to take care of the following things:

Application for a travel allowance from the DAAD:

Many documents were required for this, such as letters of recommendation and language certificates from the university.

We emailed various dental companies, many of which supported us with donations.

Before entering the country, an entry permit, the so-called ETA (=Electronic Travel Authority), must be applied for via the internet. This is valid for 30 days and must be extended directly in Colombo at the Department of Immigration and Emigration if you are staying longer (you have to plan a whole day for this, as all hell is breaking loose there).

We went to the vaccination clinic at the University Hospital in Göttingen to find out about health protection measures. The following vaccinations are recommended for Sri Lanka: Tetanus, Diphtheria, Polio, Hep.B, Hep A, Rabies, Typhoid and Japanese Encephalitis. In addition, we were advised by the company doctor to take a malaria prophylaxis as a standby – on site, however, we learned that this is no longer necessary. Due to the widespread dengue fever, do not forget a highly concentrated insect repellent (DEET) and a mosquito net!
When it finally started after the 9th semester, we suddenly had a queasy feeling and were insanely excited. We flew 6 ½ hours from Düsseldorf to Abu Dhabi and from there another 4 ½ hours to Colombo. Completely exhausted, we landed at Colombo airport in the middle of the night in tropical temperatures. To settle in, we stayed in Colombo for the first 3 nights before heading inland to Kurunegala. When we arrived at Sakuki Dental Hospital, we were warmly welcomed by the assistants – Dr. Samantha arrived a short time later. After a short greeting, he immediately asked us to put on our treatment clothes and watch the treatment process. The Sakuki Dental Hospital consists of 3 treatment units (only separated by a thin wall), a reception with waiting area, an X-ray and sterilisation room and a lounge as well as an office. The team consists of Dr. Samantha, a Belgian dentist who has been living in Sri Lanka for 16 years, and the 6 dental nurses (in Sri Lanka there is no special training for this – learning by doing 😉 ) together. We only learned on site that it is generally not allowed to treat patients as students in Sri Lanka, which is why we were only allowed to watch and not to work in the health camps. Fortunately, Dr. Samantha let us carry out certain steps after a short period of getting to know each other and after consultation. Through the treatments, we learned to work more safely and independently, and above all to improvise, as there was often a lack of materials and instruments. We also had to deal with problems such as power cuts and water shortages. The suction and drill could also not be used at the same time. The two doctors speak English and the dental staff also understand the most necessary and act as interpreters for patient communication, as many Sri Lankans outside the tourist resorts do not speak a word of English. Although the nurses are not fluent in English, we got along wonderfully and had lots of fun. During our internship, we did a lot of dental cleanings. It is unbelievable how some of the patients’ teeth looked – often thanks to the chewing tobacco that is consumed by many people there (the teeth are discoloured dark brown/black as a result). We were also allowed to place fillings and perform partial steps in endodontic treatment. Dr. Samantha made a point of showing us different things and was always interested in learning about the differences between Sri Lanka and Germany. Through him, we also had the opportunity to gain insight into the Government Hospital and 2 Health Camps. Here, the patients came from far away and waited patiently for hours until it was their turn. The working hours also took some getting used to, as Dr. Samantha treats until all patients are taken care of – this was usually around 9 pm. Sakuki Dental Hospital is also open on Sundays – the only day off is “Poya Day” (full moon). However, we were able to arrange our own working hours and days, which gave us enough time to explore the island. Sri Lanka is a beautiful country that particularly impressed us with its diversity. It has tropical, palm-covered regions, a steppe-like dry zone, the cool highlands – which are reminiscent of Germany – and fantastic beaches. Although Sri Lanka is only the size of Bavaria, everything is not far apart, but the bad roads make a relatively short journey a long one. As a German, you have to get used not only to the left-hand traffic, but also to the crazy way of driving with its adventurous overtaking manoeuvres (you are strongly advised not to get behind the wheel yourself!). The Sri Lankan cuisine is a real treat for the palate, although it is important to order “without chilli”, as even this is still sufficiently spicy. The exotic fruits are simply delicious. Our special favourite is the King Coconut, a healthy thirst quencher that we had almost every day. The people of Sri Lanka are very hospitable, kind and helpful. At the beginning, however, we had to get used to the many curious looks, as Kurunegala is not a tourist place and we naturally stood out because of them. However, these were by no means malicious, but only meant with interest. We were also particularly touched by the poverty and the hygienic conditions. In conclusion, we can only say that we had an unforgettable time and grew very fond of the people and the country. However, a clinical traineeship during your studies is not too advisable, as working is not officially permitted. It makes sense to do it after your exams, as there is enough need for treatment in Sri Lanka. We would like to take this opportunity to thank the following companies for their helpful donations: Coltène Whaledent GmbH & Co.KG, Dentinox, Gebr.Brasseler GmbH &Co.KG, Harvard, Kentzler-Kaschner, Transcoject, Henry Schein, DFS Dental Futase Systems Diamon, DMG, Hammacher Instrumente, Kuraray, Frasaco GmbH, devemed GmbH, Merz Dental GmbH, VDW. MANY THANKS! Anna Lachmann und Antje Lehmann Universität Göttingen

devemed manufactures dental instruments of the highest quality for dentistry, implantology and oral surgery. Based in the world centre of medical technology in Tuttlingen, devemed GmbH offers its customers over 4,000 dental instruments and accessories with many years of experience and constant further development. The aim of the direct seller is to make oral surgeons, dentists and maxillofacial surgeons even more efficient, better and more successful through perfectly matched dental instruments.